Ahhh!!!  I am so excited about this project I am about to share with you!!!  Last week on the Cricut Circle Blog, Cindy made an AWESOME board game for her granddaughters.  It was a princess game that she made using her Imagine.  I was super inspired and wanted to make one just like it! Here it is: 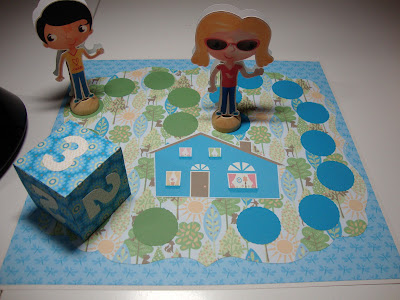 The girl I made this for just became a big sister.  In my opinion, you can't give a baby gift without something for the brand new sibling too!   This project was made with my Imagine, Imagine carts, one regular cart, and a few other supplies.  I mostly followed Cindy's directions just altering it for my recipient, who is a little less girly and I think will prefer regular girls instead of princesses.

Here is the game board itself: 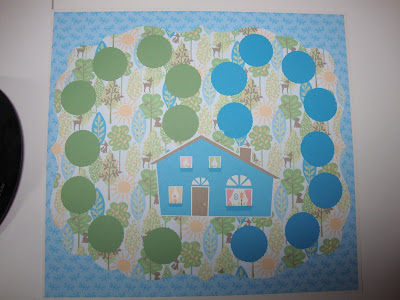 The bottom ivory color paper and the middle blue butterfly paper was printed using the Nursery Tails cart.  The tree and sun paper is also a pattern from Nursery Tails, filling a stock shape that is built in to the Imagine.  The total size of the game board is 11.5" x 10".    The circles are shapes from Nursery tails that I custom colored and cut at 1.2" each.  The house is Nursery Tails, cut at about 3".

Next up is the die: 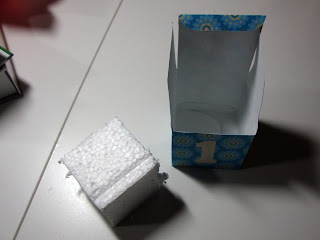 This is the box from Tags, Bags, Boxes & More.  I printed a sheet of paper with a pattern from Nursery Tails Imagine cart.  Then I cut the box out and assembled it.  Thanks to Cindy's tip, I cut some styrofoam to put in the inside to keep it from collapsing on itself when you roll it.  The numbers are cut at 1.2" from Birthday Bash, my first cuts from that cart!

Here is a more detailed pic of the game board and die: 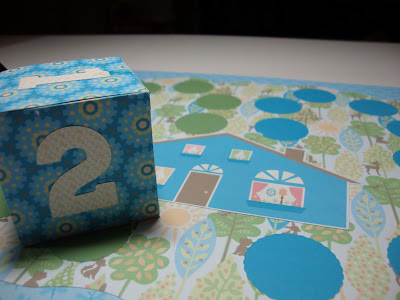 On to the girls!  These three girls are all from the Best Friends Imagine cart.  They are all cut at 3.7" and I cut them twice, once regular and once flipped.  Then I took a doll clothespin and stand (purchased from Michael's in the doll clothes aisle) and glued the girls to them.  I used Tacky Glue, which you can see in the background.  If you look at the girl in the yellow shirt, you will see a weird looking circle in her forehead.  That's because I used too much glue in that spot so WARNING!  :) 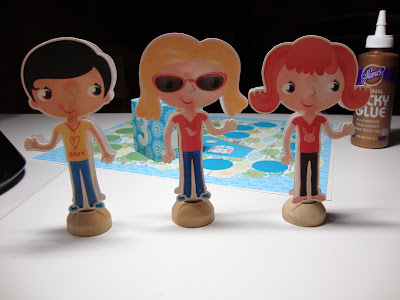 Here is a picture of them sideways or laying down so you can see how they are assembled: 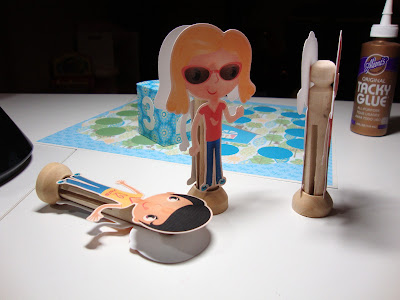 The rules of the game are pretty basic, as this is for a three year old girl.  The girls start at the bottom of the board and work their way around on their own path until they reach the house.  The numbers on the die are 1, 1, 2, 2, 2, and 3.  This will make it take enough rolls to get to the house but not so many that a three year old is too frustrated with the game to finish.   (Note: I made three girls but it only takes two to play the game.) 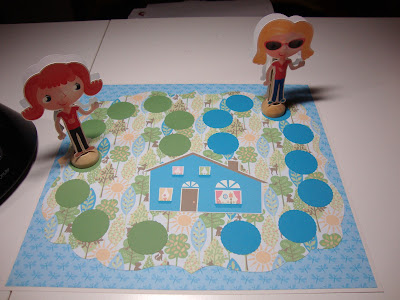 And here is another final pic! 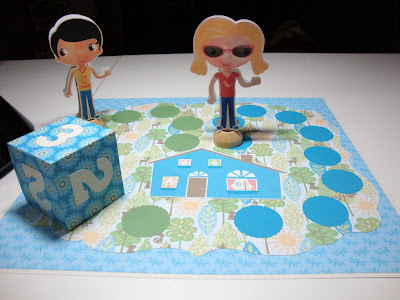 I am so excited about this project!  I am also entering it into the monthly challenge on the blog, the winner of which will receive a gently-used Expression and four carts sent to a school of their choice!  Awesome!!!

I would love to hear any comments you have about the game.  If you are a Circle member, Cindy has directions that you can download for the game she made on the Circle blog.  They were a great reference to use as I made my own game. Thanks again for stopping by!!
Posted by Mrs. Green at 11:29 AM