This week, the Cricut Circle Blog challenge was to create a layout about something that bugs you and to include a bug on your layout.  I am not a big cook so when I am in the kitchen, I do not like to be bothered.  On this hot August day, my daughter Ashlyn refused to leave me alone.  Here she is! 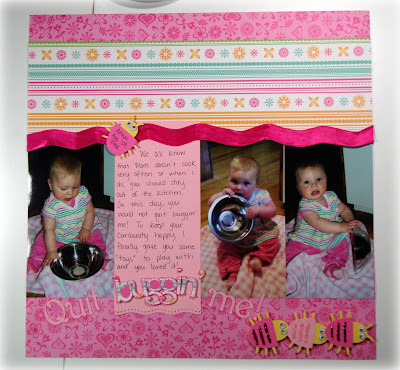 Here's a close up of the journaling so you can read the story: 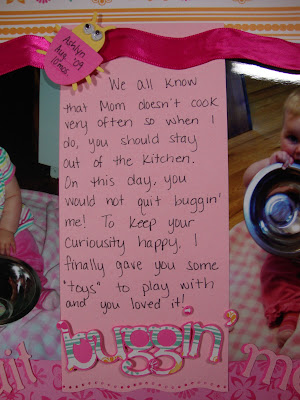 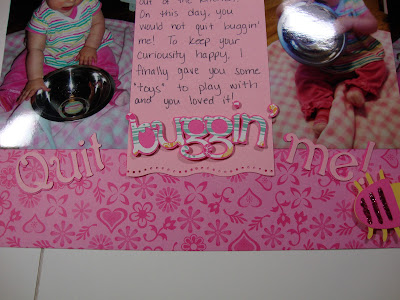 The word buggin' is cut with a shadow and pop dotted for dimension.  The rest of the words are just cut twice at the same size and then offset to give a shadowed effect.  Also, this is one of those carts that has a font on it but doesn't have the letters on the overlay so it's hard to figure out which button is which letter.  I take an overlay from another cart and set it on top of the Nursery Rhymes overlay.  Then I punch in my letters using that overlay and it is so much easier than trying to figure out that an M means I have to punch the Simple Simon key or whatever character it may be.

And the bug border from an oldie but goodie cart, Doodlecharms! I couldn't decide about the buggy eyes (I really wish I would have smaller ones) but without the bugs looked naked so they are on! 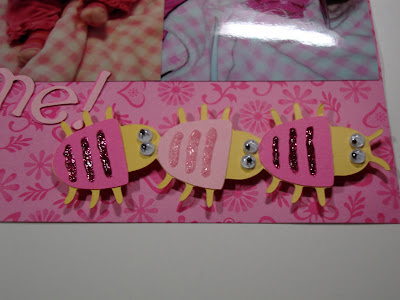 The cuts are from: